Following the Affective Turn: a techne AHRC funded research project that will follow a series of reading groups and PGR symposium 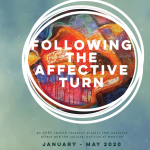 CSEL PhD student member, Polly Hember, is co-organising this exciting new project. Following the Affective Turn is an interdisciplinary research project that hopes to invite discussion and reflection on the current state of affect studies.

Formed between Royal Holloway, University of London, and the University of Brighton, we are excited to run a short series of informal reading groups centred around Sara Ahmed’s The Cultural Politics of Emotion.  This will culminate in a graduate symposium where we will invite PGRs to a series of workshops and to present their work. We are very excited to share that Sara Ahmed will be our keynote speaker, giving a public lecture at the end of the day.

The first reading group will take place in Bedford Square, London on the 19th February, 2 – 4pm.  You can register to attend here  and find out more by visiting the project website. Please email followingaffect@gmail.com with any questions or thoughts, and you can follow the project on twitter @affectiveturn for updates. 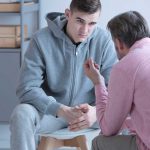 Restorative Justice is an approach to criminal justice that considers the act of crime to be an interpersonal transgression between victims and offender. As part of the approach, offenders are encouraged to ‘restore’ the victim back to their state pre-victimization through victim-offender-conferences, where the offender explains their role in the event and ultimately apologises to the victim. Advocates of this approach argue that Restorative Justice can reduce symptoms of post-traumatic stress in victims of crime. In this systematic review, Alex and Jo Borrill from the University of Westminster systematically reviewed the evidence for this claim. They found only modest support that Restorative Justice led to better victim outcomes compared to customary justice. The authors argue that methodological inconsistencies may have led to these mixed findings, and recommend more research on this important topic.

This project examines how the well-being of refugee children is influenced by their mental health, family dynamics, development, attachment, cognitive and social competence. The impact of these factors on decision making in the legal context when children seek protection will be reviewed with reference to the literature and via research. As part of the project, we will disseminate recent research findings examining vulnerability from negative life events and questioning style on memory and testimony from unaccompanied children seeking asylum.

The project will also examine secondary traumatization, whereby decision makers may become traumatised (albeit vicariously) because of the emotional impact of the work that they do. In the asylum context this may lead to increased likelihood of strategies to avoid hearing or probing accounts of persecution, which in turn leads to distorted decision-making.

Finally, a project will examine the cognitive on interpreters in asylum interviews, and how that influences the quality and accuracy of both the translation process, and information that is gained from the interviewee whose memory report is being relayed via the interpreter.

When BAFTA winning Director Victoria Mapplebeck was diagnosed with breast cancer, she decided to record each step of her journey from diagnosis to recovery. Shot entirely on an iPhone X, Victoria filmed her time in waiting rooms, surgery, consultations, CT scans and chemotherapy. The Waiting Room is an unflinching portrait of the blood, sweat and tears of cancer treatment. Victoria makes visible the often invisible parts of cancer treatment, the sickness, the fatigue, the tears and the hair loss. At home she filmed with her teenage son, as they came to terms with how family life was transformed by a year of living with cancer.

Victoria documents cancer from a patient’s point of view, exploring what we can and what we can’t control when our bodies fail us. “We have made cancer our enemy,” says Victoria, “a dark force to be fought by a relentlessly upbeat attitude. The Waiting Room is the antidote to the ‘tyranny of positive thinking’. It challenges the cultural myths that surround this disease, putting under the microscope the language of illness. The Waiting Room begins with a personal journey but as cancer affects one in two of us over the course of a lifetime, it also tells a very universal story.”

The film was broadcast on The Guardian website as part of their documentaries strand with the second part, Victoria’s first foray into Virtual Reality, will be showcased at festivals, exhibitions and hospitals later in the year.

The Waiting Room VR explores the cultural myths and language of chronic illness, asking us to confront what we can and what we can’t control when our bodies fail us. The lynchpin of this VR piece is a 9 min durational 360 take, a reconstruction of Victoria’s last session of radiotherapy, which marked the end of nine months of breast cancer treatment. This experience is counter balanced by a CGI journey inside Victoria’s body. The Waiting Room was accepted into competition at The 2019 Venice Film Festival. The Waiting Room VR has been commissioned as part of the Virtual Realities – Immersive Documentary Encounters EPSRC funded research project.

Read more about the project here and more on Victoria’s films here.